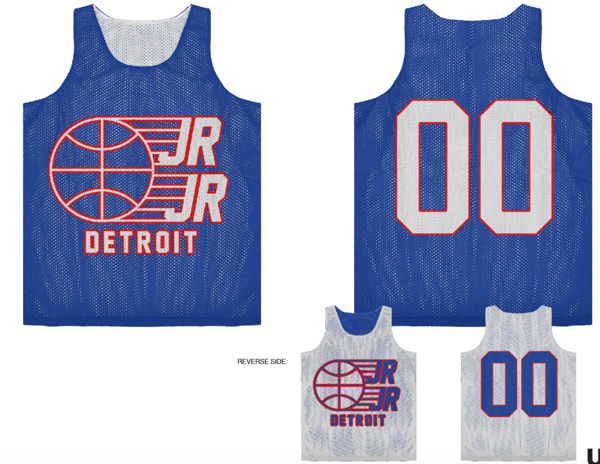 Available in both Maroon / White -OR- Blue / White. (Your eyes do not deceive you... these are indeed reversible and double-printed)

Story time: One summer, we wanted to play basketball while on tour so we selfishly made these and thought we'd likely never sell any and we'd just end up giving them to friends & crew. Now, sometimes you play outdoor festivals and those festivals inform you that you can only sell one item in their Merch area.

We gave a particular Texas-based festival a stack of these as our 'one item of the day' and a few hours later we received a frantic call from the festival merch person asking if we could give them more jerseys to sell. They explained that the Jerseys had sold out almost immediately. (Mind you, this is several hours before we played so it's not like our spectacular performance had inspired people to take out their wallets). A very official person on a golf-cart with a walkie-talkie then came and took another stack and those too ended up gone right away. Golf-cart person returned a third time and by the end of the day we had sold more of these Jerseys in one afternoon than we expected to on the entire tour. Turns out when it's hot as hell and you're in the direct sunlight all day these are just about the greatest thing to wear while sipping a beverage and watching bands play.

Side note: They're also really great for playing basketball in! (y'know, their actual intended use...)